Hard to believe it's been over a year since I last updated this place. Things have changed, but largely stayed the same. I've been even more 'plugged-in' to the old-web idea; fabricating an elaborate ecosystem of long-forgotten applications and websites I now use as aesthetic inspiration for new albums. Speaking of which, the new album is almost done! It's hard to believe I've come to the end of that particular race as well. Once again, its development over the span of more than two years has really surprised me. When I first started planning the album that would become 'Computer Ergonomics 1996', I wanted to explore the idea of corporate marketing in the sphere of 90's computing - a topic somewhat close to my heart. I was enamored with the various kinds of productivity software and suites that came out around that time, no matter what industry they were aimed at; graphic design, CAD, architecture, mathematics, accounting, whatever. It was all pretty cool to me. UI design notwithstanding, I think what really draws me to old software is still the overarching theme I like to talk about, whether in this blog or elsewhere, which is the sense of possibility that existed around the idea of computers and software. I like to call it 'blue-sky thinking'. Purely from a sense of nostalgia, of course. I believe we hit a sweet spot with computing around that time. Before SEO, advertisement metrics, cloud computing, and whatnot. That's the kind of computing I wanted to explore with this new album. The era of Microsoft BOB. Friendly colors. Unabashed skeuomorphism. 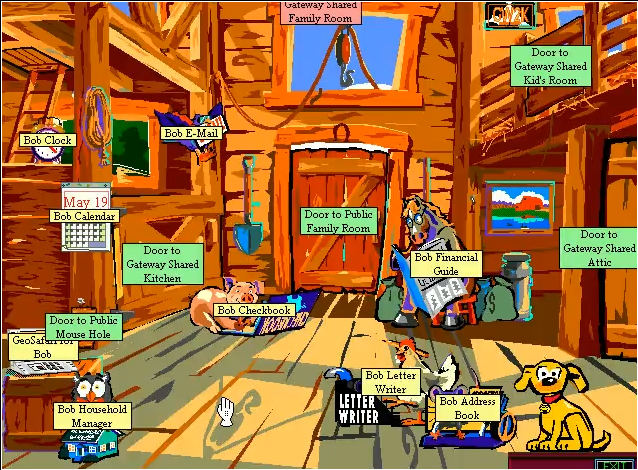 From a purely technical standpoint, I approached the album in a similar way to my other projects - with a vague idea of the sound palette I wanted to explore, knowing that it had to be somewhat period-accurate. So I turned to the Korg M1, the Roland D-50, and a bank of general MIDI sounds. I'm happy to say they served me well. Spending time and energy to refine my creative process has really paid dividends in ensuring I have a better idea of what I'm doing.

Wow, looks like it's the new year. When did that happen? I've been out of it for the last couple months, so please forgive me. What was I even going to talk about? I vaguely recall having something to say about abandonware, and loss, and the ephemeral nature of life and media, but maybe that's just getting too pretentious. It's definitely an interesting thing to think about, but I'll be the first to admit I'm not a voice to be put front and center into that discussion. There are certain times I've got to know when to keep quiet and listen.

This was supposed to be a weekly discussion, but maybe that was asking too much of myself. Life likes to shove you in the deep end whenever you're not looking, so you've always got to be on your toes. I've been working on some new sounds. Something distant from 'synthwave', distant from whatever it is that this pastiche of imagery and music my brain has conjured up to try and adhere itself to and call itself the sound of my newest album. I found myself with some spare time on my hands, so I wrote a simple, minimal R&B loop. Lots of minor seventh/ninth/eleventh/you-get-the-idea type chords, quite downtempo, leaving lots of room for improvisation. I didn't know what I wanted when I opened up a new project - I usually don't. But as is the way that these things go, I started wondering why I liked the way instrumental R&B sounded specifically when taken from video games (and I've already had that discussion before, several times). Was it about the palette of sounds used? Was it about the time the games came out? Was it more imperceptible? I don't have satisfying answers to these questions, and I wish I did. It would be nice to have some sort of direction, especially when many of my thoughts on this subject are dreamlike and barely coherent anyway! There is something I want to capture in my forthcoming music, some sort of sophistication (in the general sense) that I want to add that I feel I lack somehow. Even at its most basic level, it's never been about jazz chords, or theory, or equipment. Sure, put all of those together and suddenly making something that sounds appealing to myself becomes a lot easier, but pinning it down has been impossible. Is it authenticity?

Over the past few months, I listened to a lot of stock music libraries. A lot. I bookmarked the ones I liked and explored the richness of each collection with open ears. There's still a lot left to listen to, which keeps me excited. My usual cutoff, as far as dates go, is usually from 1989-1997. It's also fascinating to see just how many things can change in those libraries, from the mixing, to the instruments, to the artwork - especially the artwork. There's an element of conservatism in nostalgia (there's a better word for it but let's stick with this one for the time being) that always looms over me like a shadow whenever I am in the mood for a deep dive through the internet, or I retire to my old playlists. Things were better back then. It's a thought that is always there, haunting the back of my mind, especially during these write-ups. It's also something that's been tackled by people far more intelligent than I am, so I won't get into it. Besides, it's more fun if I put the thought in your head and have you do the thinking for me.

The way that this specific thought reared its head was during my first few forays into listening to stock music - I selected the KPM library and went to town, scrolling down over and over until I'd reached where I wanted. In a way it was like travelling through time. One of the things that jumped out at me was just how drastic the changes to the artwork were, over time. I was forced to recall the first time I'd listened to the Network Music Production demo CD from 1993. I'll try and show you what I mean. 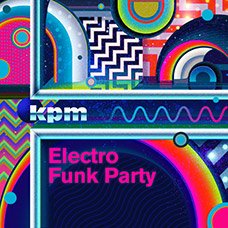 Here's the cover to a recent KPM album called 'Electro Funk Party'. The name is generic, sure, but take a look at the artwork. It was released on the 2nd of January, 2020. My point can't be made just by using two examples alone, so I encourage you to go and take a look for yourself. Really pay attention to what's happening as you go back in time on that page.

What this exercise really helped me understand wasn't anything to do with the past, or how it was better/worse than what we've got going on right now. It's an unoriginal thought and I won't pretend it's more meaningful than it is. Looking back through the artwork's evolution (or devolution) really made me understand the shifts in priorities over time. Things that people found important, or trendy, or popular, or aesthetically pleasing, undergoing various changes and ultimately becoming completely different as time goes on - a microcosm of global societal development was right there in the KPM stock music library! I say that because the music is international, even if it was produced and distributed by an American company at the time. One of the most striking examples is this sort of pan-African-ism happening around the early 1990's that was present in a lot of African and 'world' music albums. Looking back on it now, the problems with that approach are easily identifiable. But as I wrote in my last post, it was emblematic of a really tumultuous cultural shift occurring around the same time as the internet was taking off. This 'global coalescence', focusing on lesser known instruments, music from different cultural backgrounds, the presence of 'tribal' motifs in both music and artwork, percussion and woodwind - was at its peak and it's so clear to see even in just this one music library. The end of history come the year 2000 was slowly being distilled, its essence being written and re-written in thousands of songs that would be marketed as TV spots or commercial beats. There's something to be said about that, but I don't know what. All I know is that because of that music library, I was one step closer to discovering what I was searching for.

So, this is where it all begins. I decided to make this website on a whim, but the idea for it, just like my weekly aesthetic discussions, has been on my mind for many years. I started off not knowing exactly what I wanted, and that feeling remains largely unchanged as I write this. The topic I'd chosen for Week 9 of Tuesday Aesthetics dealt with something that I thought perfectly encapsulated the underlying theme of unadulterated optimism that was an undercurrent to much of the 1990's - the clear blue sky. It also acts as a perfect counterpart to the previous week's topic, the beauty of underwater caustics and the ocean in general.

A lot of my focus on elements like this has to do with what they symbolised, especially when you consider what the internet meant to people back then, and what it actually was. In retrospect, I feel like a lot of it stems from what is now known as Utopian Scholastic, a visual style that describes media from the 1990's that leaned into the aesthetic of education/edutainment. The emphasis on scientific discovery, the beauty of the natural world, and iconography/themes influenced by attitudes towards the end of the 20th Century all met in a surreal, easy-to-read set of forms that were especially conducive towards collages. Here is a good resource if you'd like to know more about it.

Such a monumental development as the internet, happening around the turn of the century, probably influenced peoples' attitudes towards a great many things - the way they saw themselves, each other, and now the world. For once in human history, one could finally start to appreciate how big the world really was, or maybe how small it was becoming. The end of 1000 years was a big deal, and the prospect of a new one seemed to open the floodgates to peoples' imaginations. The zeitgeist at the time seemed to be one infused with exhilarating optimism. The entire world on the cusp of something great - this, I feel, was one of the elements that resonated with me the most out of many 1990's aesthetics. I'd always been into science as a kid, and my shelves were filled with not only books but CD-ROMs from Dorling-Kindersley, Scholastic, and other edutainment publishers. They did a thorough job of inculcating a sense of wonder for the world around me, and part of me always hopes I can channel some of that back through my music.

The motif of an endlessly blue sky stretching on forever, dappled with fluffy white clouds, was present in a lot of imagery that came with 1990's software. It was often used in conjunction with a window, or a doorway, to symbolise an idealised experience of using the software. Because when you placed a CD-ROM in your computer and ran the executable, you weren't just running a program - you passed through a gate, into the world that the software had created. Sometimes, I wish more people nowadays would approach software and applications with the same simple excitement afforded to older programs. Maybe we just won't feel that way until we're on the edge of another millennium, I don't know. Until then, I think the best we can do is keep rediscovering cool stuff from way back when. 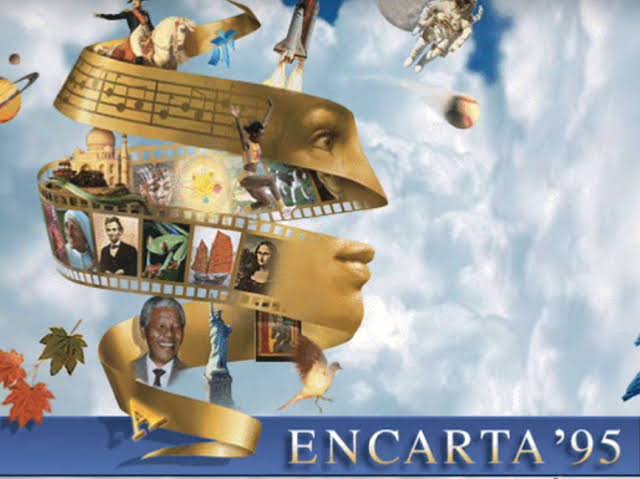 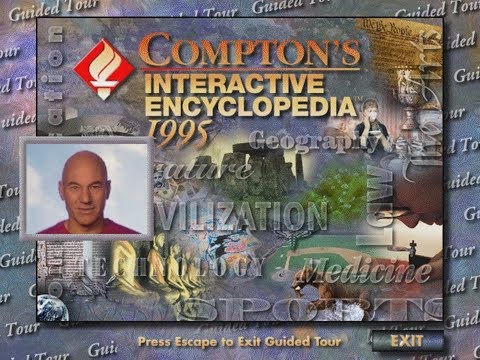